There was weighted disappointment behind each obligatory reply back, accompanied with limp “better luck next time” sentiments. They all knew full well; however, that I  had no other  aspirations of “trying” again. I had decided to be done at two. Perhaps they were mourning a little too for the daughter everyone thought I was going to have.

With a thick goop of lubricant smeared on my belly and the sonography probe pressed against it, the technician continued to click away at the screen, giving me the measurements of the baby in my belly, as if anything else really mattered that day. The only measurement that mattered that day was whether there was a perceptible appendage developing in my womb. With this last pregnancy, my morning sickness was bad. Like dry heaving every 2nd step on my walk to the train. For a good four months, just about everything smelt like wet dog. Even my son’s wool rug.  Hell, even my son smelt like wet dog to me.

I had been convinced that the intensity of my morning sickness all but guaranteed the likelihood of having a girl because, even in the womb, I was told: girls pack a punch. The logic was simple: girls will make mommies-to-be more sick. This HAD TO BE TRUE; my first boy had been a breeze!  Barfing? Wet dog? None of that. I was confident I had her in the proverbial bag. But alas, the baby in my belly turned out to be a boy.

Everyone’s wishful thinking got the better of me. Even my own.

I always imagined that I’d have a daughter. I’d raise a little feminista, a mini-me, but one with a happier disposition than me. Although I don’t know how to do hair, I would have learned from one of her aunts, a hair stylist; and although I was terrible at math, her father would have been there to tutor her. I knew my “No. 1” job for my daughter was to ensure that she would be a happy child, a confident child that would learn how to navigate an often unfriendly world toward girls under my wing.I was ready to have all my bases covered. 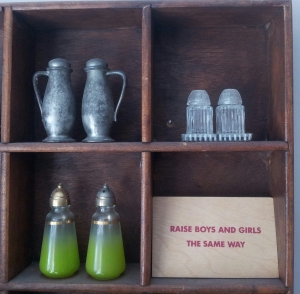 I was ready to buy “Daughter Insurance.”

I would be lying if I didn’t admit that my initial feelings of disappointment quickly dissolved into relief. Why the wariness about raising a daughter ? Why did the prospect of raising a daughter raise the red flag of liability? What outcomes would I encounter, had my son been a daughter? What type of insurance would I need? I hope this theoretical conundrum says more about our society’s view on women than on me.

If I had a daughter, what advice would I give her? My mom’s “advice” to me and my sisters came in staccato spurts, commands, and warnings. Consider that the first compulsion for most Chinese immigrant moms is to scare or guilt their children into what NOT to do because everything may result in getting addicted to drugs and getting pregnant and !@#$ing up in school.

My mother bore and raised four daughters. She has earned her right to deliver doomsday forecasts laced with unromantic morsels of extreme pragmatism (Stuff like: As long as you have rice to eat, you’ll never be hungry. So stop eating up all the meat. Save that for your Dad. He’s bringing it to work!)

I’m not dissing my mother’s advice by any means. She’s why I am who I am today, but if I were to have a conversation with the daughter I was so sure I was going to have, my conversations would probably differ greatly; namely because we would speak the same language and avoid generational pitfalls that would result from getting lost in translation.

I release my imagination to the task. These are my imagined conversations with, shared observations and yes, advice to the daughter I thought I was going to have.

Don’t bet on meeting that prince. You don’t have to like Disney, but you probably will. You may not look like a Disney princess for one thing. Real romance isn’t always so predictable and precise. Your intelligence may be underestimated someday like many of the protagonists of their films, but a prince will most probably still not be the answer to your woes. Most likely, you’ll meet someone (girl or boy) that reminds you of Daddy. Sounds really weird, but it’s true.

Raise questions. Throughout your schooling, you may notice that your male counterparts will be called on to answer questions more often than you or your female classmates. This may be an example of gender bias.  Try raising your hands and answering some questions too. Even better, raise questions. People may really benefit from your ideas just as much as you may benefit from their ideas.

Eat and feel good doing it. You may someday realize that food will be your greatest lover and your greatest frenemy. Choose friends who help feed your appetite; usually those are the people you can be most yourself with (No. 1).

Enjoy your curves. You will be told that everyone is built differently. You will ignore that advice and you will probably try to alter your body at some point with a fitness regimen or a diet regimen for most of your life and at that point, I would remind you to refer to No. 1.

Your body will be treated like public property. People will often treat your body as if they have a right to it. They will look at it. Comment on it. Even touch it. Some people may just look at you and think they know everything about you. Sometimes what you wear will matter more than what you think. What’s worse is that you may start believing it. Know this. That’s why we have No. 1.

You don’t have to smile all the time.  It can be exhausting. Some people call the resting state of a woman’s face a “bitch face.”  So after a few interactions where people ask if you’re upset or distraught because there is no smile splayed on your face, permanently, you may be inclined to put on “Smile Face” even if you don’t want to smile. You may feel like that is what’s expected of you. You may very well be right. Refer to No. 1.

Stay single for as long as possible. You may not believe me now, but be single for as long as possible. Travel with friends. Taste different foods. I’m not saying you shouldn’t date; I’m saying: you shouldn’t settle. Or maybe I am actually saying you should date a lot, like men are encouraged to. Like, don’t expect to marry the first prince you meet. Heck, don’t expect relationships to end in marriage. Refer to No. 1.

Get everything in writing. Especially when it involves money.  Document everything down to the period. Which means, practice due diligence in your correspondence as well and be mindful of your word choice and NEVER correspond when you are angry. Learn that from me. I have eaten my words on many an occasion (Learned that No. 1 is a process.)

And Work. Work for everything you want. I don’t know what else to say about that.

It’s worth taking note from the mom that started it all. She has an old adage that I used to dismiss like an incorrigible ABC (American Born Chinese) as I now reflect on how little I regarded my mother’s words when I was younger. Alas, it is better late than never to admit that

Be fearless. She never failed to remind me how useless being fearful was.  She would ruefully intone that if she had learned English, she could have done anything. She would have learned how to drive because then she would have known how to read the street signs. She would have been able to get a better paying job and shop for herself too. She wouldn’t have had to rely on my father so much. She would have been more independent. And although I can be quite dense, I did finally realize that all the times she had given me her old adage; it became quite clear that she was convincing herself of the same.

Which brings me now to a newer revelation.

To the daughter I thought I was going to have, perhaps these imagined conversations are ones which I’ve imagined I would have with my own mom because in them, we would fill the gaps and the silences with vocabulary. Lots of vocabulary. Where I could tell her that she had been “Right all along,” and that she could respond in kind, with a nod and say, “I know.”

500 words a day on whatever I want