Note: I was trying to go for a much shorter read about criminal justice prison reform but this post transformed into something else much longer. Anyway, this is my first post on my teaching philosophy and my reflections on my positionality as an Asian American teacher to predominantly “Hispanic” or Latino and Black students in Harlem for the past 10 years. I’m filing this under “Stuff I Teach.”

I got into community work just as California was revving its youth criminalization engine with Prop 21 (lowering the age of felonies and upping the punishments and amassing investment in the private prison machinery) back in 2000 (even though SF county voted against it; it was overwhelmingly approved by the CA voters.) Engaging in actions against Prop 21 further politicized me, humbled me and made me confront my rather insular interactions in my hometown of San Francisco and it allowed me to recognize the uncomfortable position I held as a non-target ethnic and gender “winner” in the racial and social hierarchies of a post-Civil Rights, false post-racial world and hyper-criminalization of black and brown youth (including Southeast Asian Americans).

As an Asian American straight cisgender woman, it may very well be easy to dismiss my skin in the game in the current debate on race in America. Although fitting into certain spaces by virtue of my race and gender neutrality, I can’t, in good conscience, live and function docilely in colorblind spaces, get paid to work in communities of color (in a Title I school in a black and brown community) so situated in historical disenfranchisement and also be a beneficiary of the struggle for freedom and jobs led by the African American Civil Rights Movement as part of the post-1965 immigration boom and the many waves of the feminist movement.

It may also appear that passing through many spaces–white, brown and black–reveal that I’m seen and thus treated as performatively white, especially if you have a Northern Californian accent like myself. This is an appropriated privilege to some. I’m part of the “safe” race and the “safe” gender in the room: the quintessentially symbiotic combo.  I’m the perfect minority.

This puts the social justice oriented Asian American in a quagmire. By virtue of the historical positionality of the Asian American construct, many Asian Americans ride the wave of race privilege.  Without a conscious challenge to this racial hierarchy, they are linked to the unconscious ties of anti-blackness, an offshoot of their model minority status. This acquiescence to white ideation is what author Jeff Chang has called racist love. In lieu of becoming racial exemplars to the white hegemony which pit Asian Americans against all other non-white groups, writer Sahra Vang Nguyen pins Asian Americans as the perfect  tools of “anti-black propaganda.”

Growing up in San Francisco in a predominantly Chinese American neighborhood, with neighborhood schools dominated by East Asian Americans, it was easy to imagine life in the city without much racial and class variation. The racial hierarchy in my schools was very stark: The black and brown folks were the kids in the remedial classes and the Asians and the few whites, were relegated to the top of the heap. Although my schools were predominantly “minority,” the majority of the schools I attended were Asian American dominant and higher performing, relative to the “bad” schools in the “bad” neighborhoods, aka. schools with black and brown students in black and brown neighborhoods.

As an Asian American teacher working in a public school with predominantly black and brown students, I’m placed again in a complicated racial hierarchy that doesn’t like to name itself. I am rather anomalous in Harlem, but as a teacher of the African American Civil Rights Movement, I am freakish. Once I referred to myself as a person of color, only to be greeted with an involuntary snort from one of my students.

Where do I, an Asian American teacher working in a historically black and brown neighborhood, belong in the conversation about race in America?

I teach high school world history and American government in Harlem. Although, my school does not espouse a social justice philosophy–we function politely and colorlessly–it’s been my mission  to incubate reflection and action in my classroom by studying  social movements and by injecting a deconstructivist approach in world history. (These days, this type of curricular freedom is sanctified. I am incredibly lucky to be able to do so in the age of the Testing Lobby).

It’s my small piece of the pie, but, like most of the teachers in the school, I am an outsider.

I know most institutions perform with colorblind shades on. Most of my students have never talked critically about race, class, gender and sexuality until they reach my class. They don’t trust each other, nor themselves. They are also from New York City, where everyone has a story–so everyone’s trying to figure out how to make their story stand out. They carry the city in their veins: they live in Dominican, Puerto-Rican, African American, Black, African, West Indian, Ecuadorian, Guatemalan and Mexican neighborhoods and they call converge on the subways and enter my classrooms. Every year the light skinned and the darker skinner self-identifying Spanish girls get in rows about who is Spanish and who isn’t because no one is black.  My undocumented students always lay low, as do my LGBTQ students and my Muslim students…initially. My male students of color usually speak eloquently about race identity, but so they often fall flat when asked about sexism…initially.

It’s a reality that many of my students know people who have been locked up, have a long rap sheet or have been in the criminal justice system themselves. In informal polls (Raise your hands if…) all but a few of my male students of color have admitted to having direct contact with police throughout their young lives in New York City. Last year, 100 alleged gang members were arrested under the charges of conspiracy, assault and weapons violations near my school in an early morning raid. I scanned the mug shots for my students, former or  current.

As nationwide attention to issues such as criminal justice and prison reform is taking shape, I feel like I’m witnessing history. These days there are some big names behind prison reform on both sides of the aisle. Senator Rand Paul (R-KY), along with the junior Senator, Corey Booker (D-NJ) , have been making some bi-partisan headlines on prison reform, whether it is couched in moral or fiscal concerns. Surprisingly, there have been a bunch of conservatives stepping up their prison reform stump speeches on the same fiscal (and moral) grounds. Even the Koch bros are getting in on this.

Last week, President Obama became the first sitting president to visit a federal prison, after granting clemency to 46 prisoners serving life sentences for their non-violent drug convictions last week. He spoke of second chances, mistakes and the Draconian results of those youthful mistakes and the need to re-evaluate the ways of a country’s prison system that houses 25 percent of the world’s prison population (whereas US only makes up 5 percent to the world’s total population — I haven’t fact-checked these figures.) 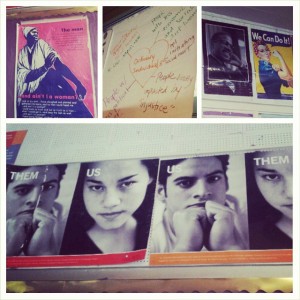 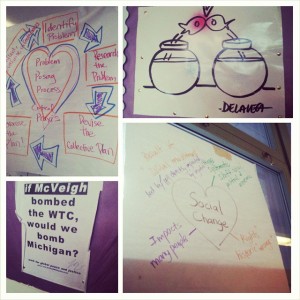 If I did not openly support issues such as criminal justice and  prison reform, I would be endorsing an open season on so many of my students (particularly my young men of color–and I have fewer of male students–whether that indicates a gender achievement gap in communities of color I would need to research that more.) and their communities/families, who I directly benefit from with a job, and who are so easily dragged into a criminal “justice” system (which portends to be “colorblind”) supported and fed by uneven policing and uneven punishment, such as the mandatory minimums of non-violent offenses, like drug possession and mass sweeps of those who are more guilty by association than guilty of actual crime.

In this last year, #BlackLivesMatter, #MikeBrown, #HandsupDontShoot, and #EricGarner exploded in response to the killing of unarmed black people by police officers. These killings sparked a nationwide response against police brutality, galvanizing many of  my students to reflect and act. They didn’t know what they wanted to do, but they knew they wanted to do something. They formed a student action group, a fledgling little thing with big ideas. It’s a messy process, but it’s a labor of love. Their goals are bigger for the coming new school year. It’s a beautiful start.

They started with a conversation.

This was greater than just a teachable moment. I’ve backtracked on calling myself an ally. I cannot bestow that label unto myself without the blessings of the said communities; but I will listen and observe and speak up as I work along the intersections as an advocate for social justice. I don’t consider myself an activist, although I study social movements and the unfolding #BlackLivesMatter movement and hope my students find meaningful avenues to exercise their agency in the face of injustices.

For many years I stood up in the classroom in teacher face, or white face. It’s been a process of unlearning the ego of false authority and rectifying my own identity as my true teacher self: short, Asian American/Chinese, mom, West Coast  and loud. Instead of avoiding questions about my identity to my students, I start the semester with some contextualization: why I am who I am and why I teach what I teach. It goes a long way.

I am still situating myself in discussions of race in the context of the communities I serve. I am an “equality for all” minority attempting to subvert what activist Soya Jung dissects as “Asian American privilege” by consciously teaching curriculum centered on the lives of the underrepresented, the appropriated, the erased, the targeted and yes, the killed.  The crux of my curriculum hinges on explicating consciousness and agency. This is my praxis as a social justice oriented teacher: teaching is reflection; teaching is practice.

What I can say for sure is this; although a decade into teaching, I have so much to learn, still. What’s also heartening to know is that there is so much good work happening with coalition/alliance building (list below) in the Asian American community.

My teaching practice is indelibly tied to (the project of) mending the cyclical fractures of the inner-city public school. New York City public schools, those most distressed and with high turnover rates, tend to draw in the inexperienced, the unrealistically ambitious, the transient and the young white teacher.  It is so easy to enter other people’s spaces, as outsiders, and simply occupy the spaces. The school is so often that occupied space and so many times, the most unwitting culprits are the teachers acting unconsciously as its wardens. More importantly, the school can also be the launching pad of real potent subversive work.

With critical reflection in mind, here’s one thing I ask my students to consider every year: I beg them to become teachers and come back to reclaim their space.

Here are some resources on Asian American Solidarity in context to #BlackLivesMatter and coalition-building (and some teaching for Social Justice Stuff:

– This Lunar New Year, supporting #BlackLivesMatter is the Chinese thing to do  By Kung Feng and Ellen Choy

– Facing History and Ourselves: https://www.facinghistory.org/

– Pedagogy of the Oppressed By Paolo Friere

2 thoughts on “A Decade In: My Reflections as an Asian American Teacher in Harlem in These Times”

500 words a day on whatever I want